I am a fan of precise communication. Big time.

However, I wonder how accurately humans really communicate. You understand these words, right? No problem.

Well, let’s examine that a little deeper (it might seem tedious, but hang in there):

The cat is sitting on the chair.

Clear enough. You understood these words. But have we communicated precisely? (“Precisely” means that your understanding of those words matches what was intended.)

“The cat”? “Sitting”? “On the chair?” What comes to your mind when you read “the cat”? Is it the same thing that comes to my mind? If you visualize that sentence, does the cat have a color? Is it a house-cat, or maybe a lion?

What does “sitting” mean to you? Does this mean sitting like a cat, or sitting on its butt like a human? Might the cat be sitting in the lotus position?

“On the chair”? Does this mean on the normal part of the chair? The armrest? The back? What is meant by “chair”? Could a stool be a chair? Is it a chaise? Recliner? 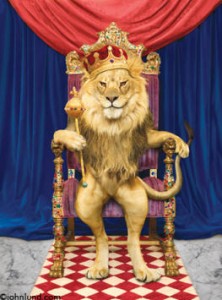 He just uncrossed his legs.

I intended to communicate that there was a lion sitting cross-legged on a throne. Silly, yes, but revealing. (Nevermind what is meant by “lion”, “cross-legged”, or “throne”.) Unless this is what immediately came to your mind, my communication was not precise.

But hang on, given that the sentence “The cat is sitting on the chair” is so vague, what is actually communicated? Unless otherwise cleared up, those words mean completely different things to different people.

It is like the equivalent of saying, “that is there”. What is communicated by such a sentence? Anything? Are these essentially meaningless sounds? “That is there” means nothing? Literally, nothing? If it means something, what? And be specific.

Here’s where it gets interesting. Let’s say that there is some small level of effective communication with the cat-example. Though our initial understanding of the sentence might be wildly different, there is some correlation – but it is an abstract correlation. Someone might say, “Well I didn’t know it was a lion sitting on a throne, but at least I knew it was a feline sitting in some way on some thing.” We see categories of things (chairs, animals, etc.), and recognize our ideas fall into the same general categories.

If you knew I was talking about a lion, but you were thinking of a specific species which was different than mine, would we call that ineffective communication? Even if you nailed the species, but we were talking about different sexes, would that be ineffective? You get the idea. At some point, precision and specificity becomes irrelevant, oddly enough.

Let’s say a physicist wants to teach his class about gravity. He drops some various things. How effective was his teaching if all the students went away from his class thinking that gravity only effects the specific items which the professor dropped, in that classroom, at that time and place, with that amount of people watching. The students will have missed the larger abstract principle (gravity seems to affect everything), and we have an example of ineffective communication.

On the other hand, let’s say you are an aspiring criminal detective. Your superior tells you about a specific investigation where a woman killed her boyfriend with a knife. He phrases things in such a broad way that you conclude, as a principle, women always kill men with knives. From his specific example, an abstract principle was drawn. Another example of poor communication.

So, is what you are trying to communicate very specific? If so, use specific words. If it is broader, be explicit about the general principles. (If you are mad that your spouse didn’t do the dishes, is it understood that, as a general principle, he/she should do the dishes all the time? Or was it just in that specific case, due to specific circumstances, he should have done the dishes that one time?)

But alas, it isn’t so easy. Let’s get a little more skeptical. When you choose the words which you want to communicate, how did you arrive at the meaning which you attach to those words? Do you communicate over a dictionary, looking up and agreeing on the definition for every word? Of course not. Your experiences determine what specific definitions and feelings which you attach to words. If you’ve never experienced the color “red”, you have absolutely no idea what I am talking about, even if we use the same word.

I assure you, whatever you mean by those words is different, to some degree or another, than what I mean. In fact, if you and I were to look in the dictionary, it still wouldn’t resolve this difference.

[Yes, we can agree with the formal definition of "illegitimate", but our associations attach to it are very much our own, and thus, the use of the word will differ. We agree on what a table is, right? Can a stool be a "table"? You can make the case either way, and it seems silly to ask what the "true" or "real" definition of a table is.]

The point is, it is mistaken to think we appeal to objective definitions to words when we speak. My understanding of the government will never, ever be exactly what anyone else’s is. And yet, we act like it is so.

Here’s the bottom line: though I don’t think we can share information perfectly, given the nature of language, and it seems more likely that there is a sliding scale for effective communication. If someone is careless about their word choice or vagueness/abstract vs concreteness, their communication skills will be negligible. They are going to live in their own world, stuck with their specific definitions for words, and unable to share information and ideas at any precise level.

Only when you are aware of the limitations and biases of your own language, and you try to put yourself in the shoes of the person whom you are communicating with (also known as “getting on the same page”), can you feel justified in believing your exchange of words was not a mere exchange of syllables. And that you are, for the most part, speaking the same language as the other person.

This entry was posted in How to Think Critically and tagged critical thinking, how to think critically, language. Bookmark the permalink.

One Response to Precise Communication: Concrete or Abstract? Even possible?