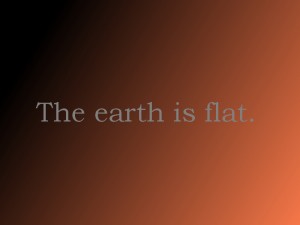 If finding truth is the goal, there could be few things more valuable than being wrong. Unfortunately, being wrong is also the hardest thing in the world for a lot of people.

Think about it. By knowing what not to believe, you are one step closer to knowing what to believe. You could even say that you found truth, by knowing that a certain belief is incorrect. That is exciting. It is absolutely the case that the earth is not flat. Wow! You can find truth by finding falsehood! This process of elimination is invaluable and rock-solid. You can be sure that your non-beliefs are accurate.

The problem arises when people try to justify their beliefs without having a justification for them. They assert conclusions and can not back them up. Then, to make things worse, they live their lives based on those unjustified conclusions, which makes it infinitely harder to come to grips with inaccurate beliefs. The longer this goes on, the more hopeless the situation becomes for discovering truth.

For example, let’s say someone has lived their whole life believing that DDT (the insecticide)  was harmful to the environment, and hence was harmful in the long run to humans. They devoted their life to the cause of banning DDT, and they were successful. Later down the road, some studies come out showing that the banning of DDT has caused literally millions of human deaths due to malaria brought by mosquitoes, and the “science” showing the harmful effects of DDT on the environment was shoddy.

In this situation, your brain must do everything possible to keep your worldview together. The mind has an enormous incentive to rationalize denying one piece of truth in order to keep from breaking down. At this point, with such enormous consequences, it is not only a pride matter, but a sanity matter.

This leads to the next building blocks for accurate thought:

Step 2: Don’t defend what you have not thoroughly justified. (at this point, that includes pretty much everything)

Step 3: Find truth by knowing first what not to believe.

That being said, there are an staggering amount of beliefs that claim truth. How can we trust our faculties to be sharp enough to discern true from false?

There is an extremely powerful tool to do this, which I will share in detail later.

This entry was posted in How to Think Critically and tagged being wrong, finding truth, how to think clearly, how to think critically. Bookmark the permalink.