Let me use small words for you: you. are. stupid. You don’t make any sense. People don’t 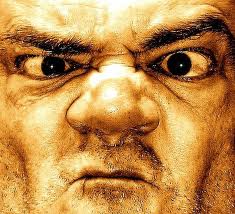 like you. You don’t have any friends. You are wasting my time. You have the intellectual capacity of a three-year old. Did I mention that you are ugly? And arrogant. And naive. And you’re a know-it-all, though you don’t seem to know anything. You moron.

Feel that uncomfortable gut feeling? Notice it. Identify it. Don’t forget it (you dim-witted nincompoop).

Poker is a great game. If you are observant, you can learn a lot about human behavior, while winning money at the same time. For example, when an inexperienced player makes big gestures and confidently shoves his chips into the pot with a loud push, he’s compensating. He is intentionally sending signals to try and intimidate the opposition.

Conversely, when a beginner looks nervous or unsure about his hand, and puts his chips in like a little mouse without any eye contact, look out. He’s got a whopper.

Outside of poker, we see this compensation-behavior everywhere. No comment about the loud guys swerving hummers through all lanes of traffic.

This is essential to realize when having rational discourse with anyone. When the insults or attacks start coming out, you know you are getting somewhere. People will try their best to cut you down before getting close to admitting they are wrong. Indeed, when you can recognize it, this phenomenon can be quite funny.  Take for example Congressman Pete Stark. Enjoy his reaction to simple questioning, and consciously recognize his attacks.
Why such anger? Because somewhere in his brain, he knows there is a contradiction in his worldview. After all, he’s an elected official! How could he admit to himself that he hasn’t thought through these relevant issues? He can’t admit that. So he attacks. Everything from the interviewer’s educational background to his character. Just for asking questions!

Put yourself in the questioner’s shoes. If you aren’t prepared, those attacks would make most people shut up and regret asking anything. That gut feeling would take hold of the questioner, and there would be that discomforting feeling of embarrassment/discouragement/shame and everything else that makes people red in the face. Most people will either give in and back down, burst out (with counter attacks), or just shut up to make that feeling go away. Don’t.

If truth matters, then don’t back down. If people can’t justify their claims, that is not your fault. Exposing contradictions is invaluable for discovering truth.

Instead, know with certainty beforehand that, if you are going to seek truth, you are going to get attacked. But that’s a good thing! Aggressiveness means you’re getting somewhere! You can know why you’re being attacked beforehand, and jump up and down inside for knowing that you are one step closer in knowing what not to believe. It’s like you’re looking at a treasure map, and you’ve just discovered a big red X on the ground in front of you. The only thing that is standing between you and digging it up is some insecure parrot calling you names. Who cares about that?

After all, if any claim is actually true, there is absolutely no justification whatsoever to defend it with aggression. Truth is truth; it wins. And really, who cares what names you get called if you know truth!

The only people that won’t respect you for discovering truth in a genuine way are parrots. Parrots who you can know with 100% certainty do not have justification for their claims, either about truth or about you.

This entry was posted in How to Think Critically, Objective truth and tagged asking questions, charlie sheen winning, finding truth, how to think clearly, how to think critically. Bookmark the permalink.